Visualization and comparison of skewed distributions in the context of wealth inequality.

The Survey of Consumer Finances (SCF) is a survey performed by the Federal Reserve every 3 years to gather information about the finances of families in the U.S. It is designed to produce a representative sample of families across various demographics, and so the data can be used to estimate things like distributional properties of income, net worth, savings, etc1. 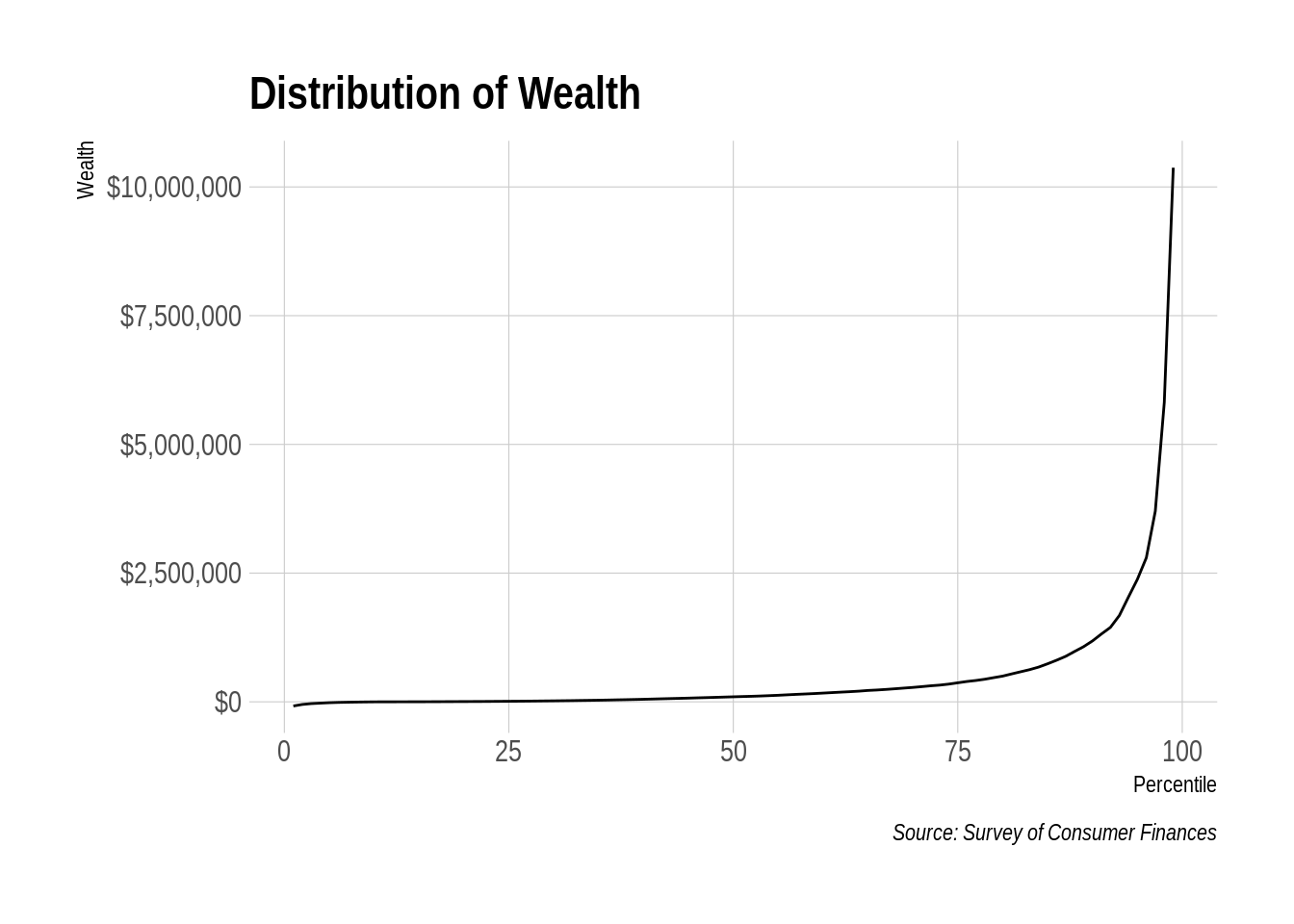 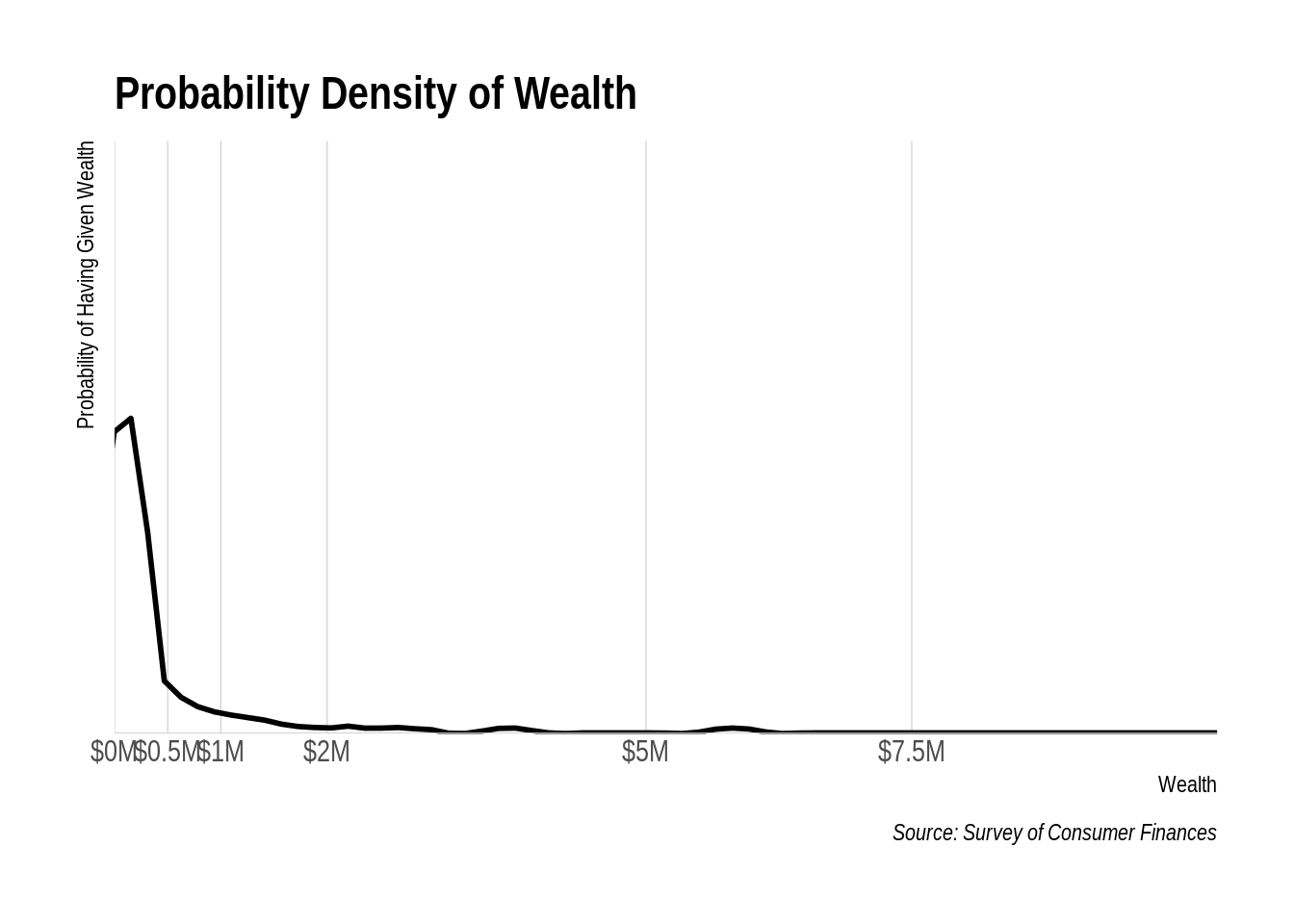 The huge bump on the left corresponds to the near-certainty that you will have a sane net worth (<=$1 million), and the likelihood of you having more wealth becomes almost nil after that point.

This is all to say that there’s a giant “skew” to the distribution of wealth towards a likelihood that you will have a very small (or negative) net worth.

You might already see that this skew becomes a problem if we want to look at the distribution of wealth within a reasonable range – everyone that isn’t super-wealthy gets compressed to a small bump in the density plot, and differences between people who have less than, say, $300,000 are imperceptible in the first percentile plot. This problem becomes more acute when we’re interested in comparing the wealth distributions of subgroups of the overall population.

The SCF contains information about the racial demographics of the respondents, which is censored to 4 subgroups in the public data release:

A good question to ask is: “How are various racial groups doing with respect to one-another, in terms of wealth?”. As we saw above, there is terrible wealth inequality, but is it more terrible for black people?

You might try and compare summary statistics and say things like “The average or median net worth of black families is lower than that of white people.”, which is meaningful, but suffer from some problems (this is true of reporting any single summary statistic of a distribution).

The average is distorted by families that have very large net worths (what’s the average wealth of a room if Bill Gates walks in?) and the median can feel somewhat arbitrary.

The first thing to try, perhaps, is to plot all of the percentile plots at the same time. This has the same skew problem that we saw before, even though it is a bit informative: 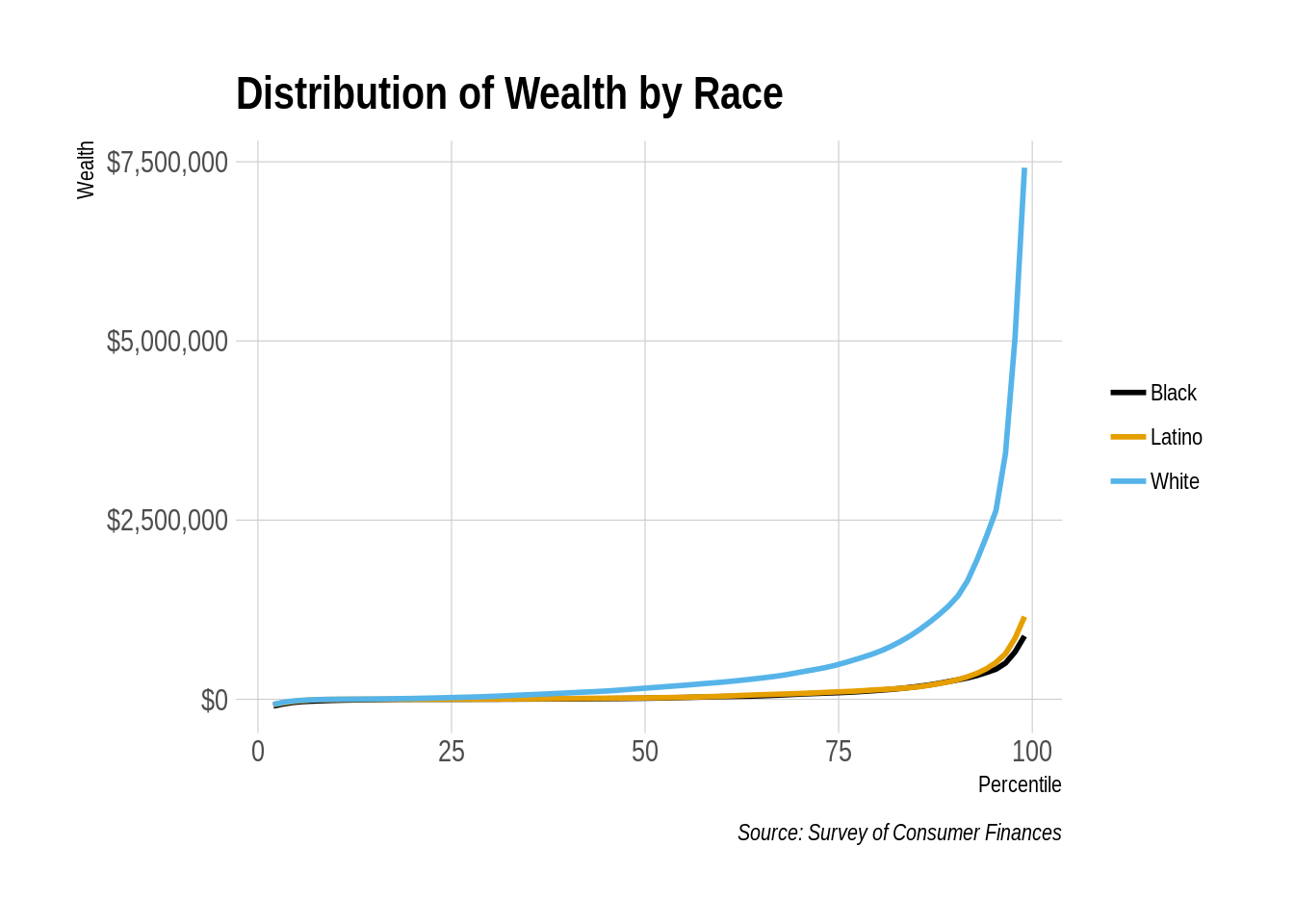 You might try to look at, say, the ratio of racial wealth to white wealth at every percentile: 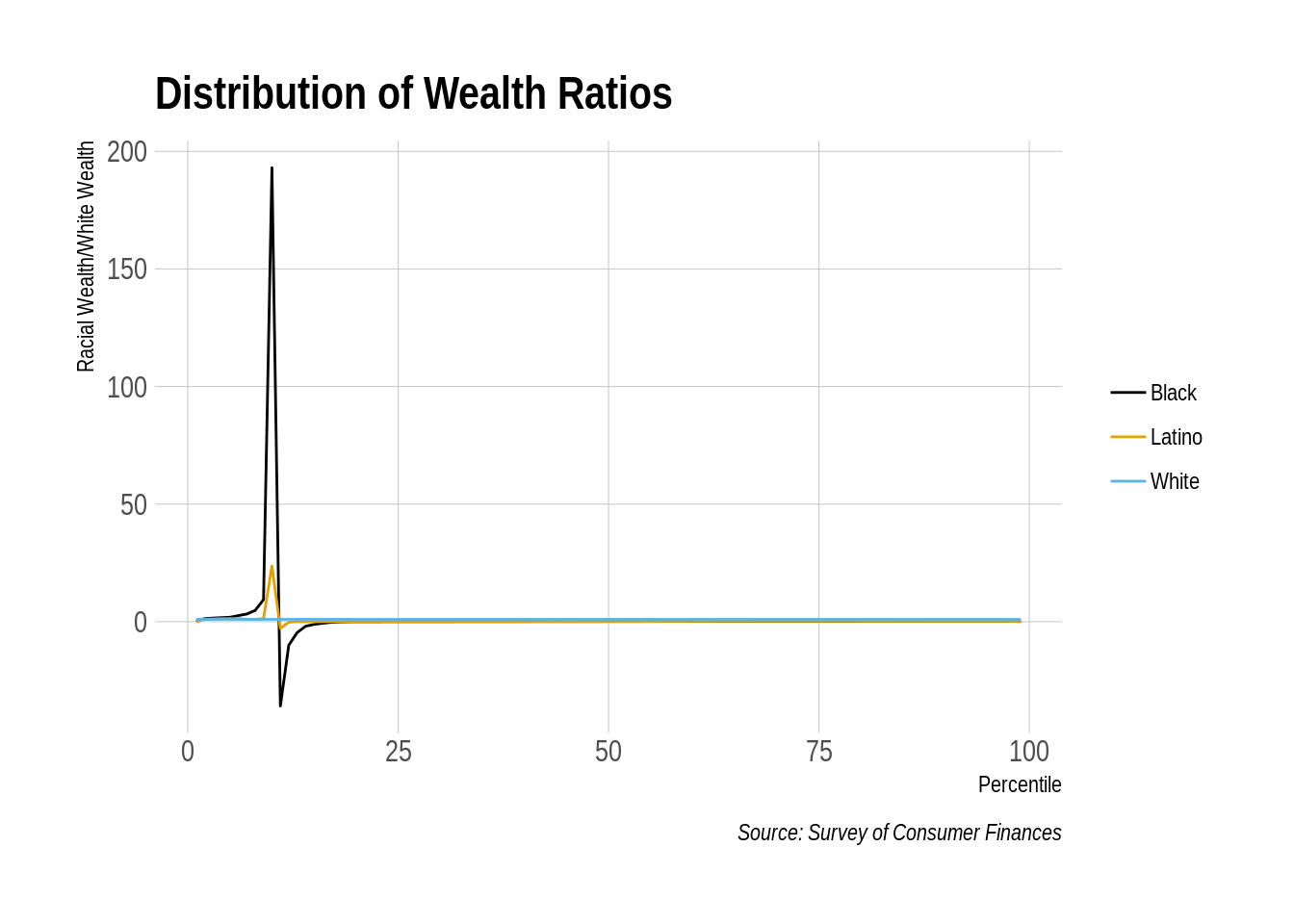 This has both division-by-zero problems and screwy things happening near the lower end of the wealth distribution, where net worths can be negative.

Another naïve alternative is to look at the absolute differences for each percentile: 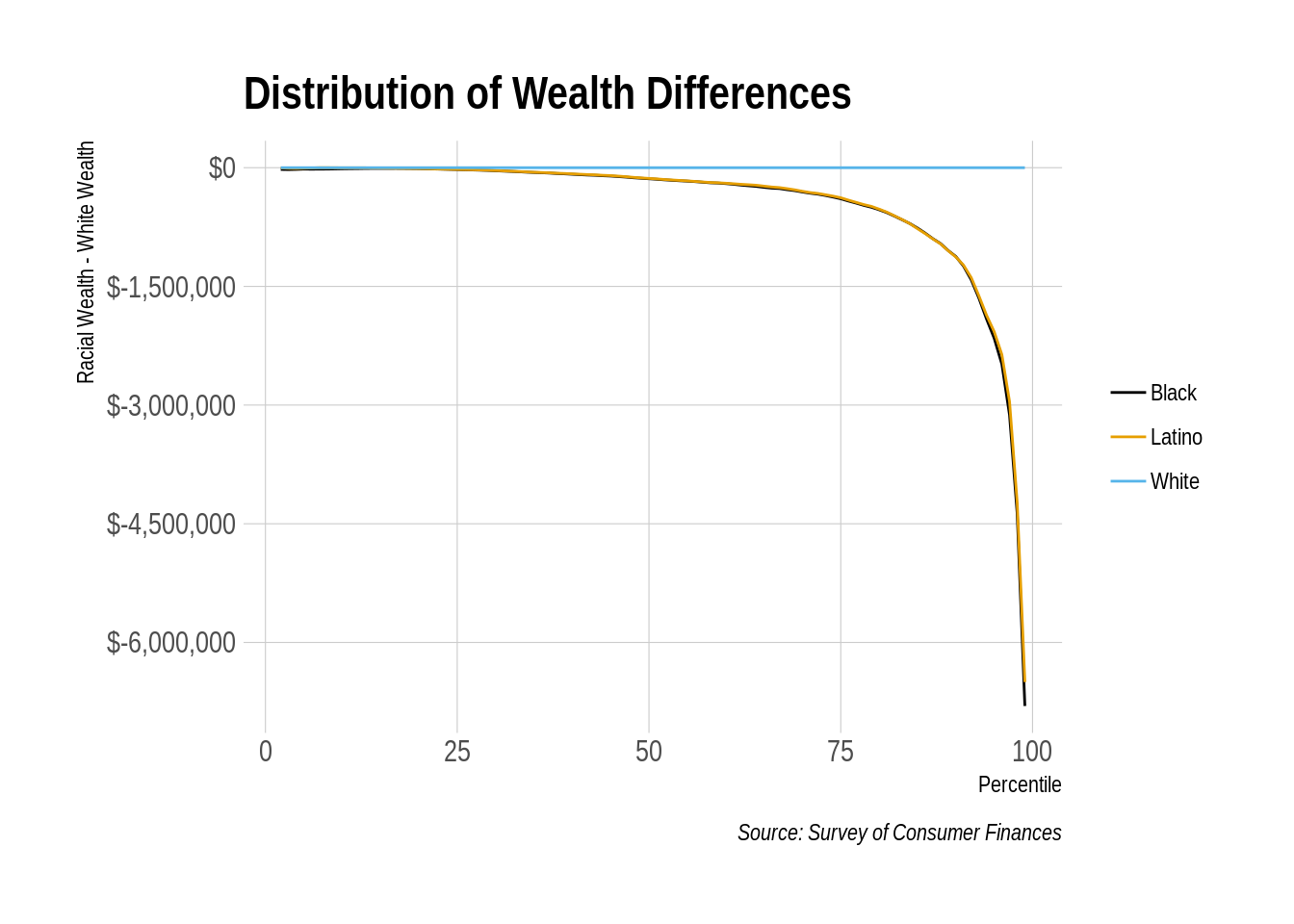 This doesn’t work either, because of the skew in the distribution – the differences are relatively minor at lower wealth than at higher wealth, where, say, a 5% difference in wealth at a net worth of $10 Million would amount to hundreds of thousands of dollars.

So, if we want to display differences in a more “spread out” way, what are we to do?

Fortunately, there are some reasonable solutions to this visualization problem that let us actually see some important differences in the wealth distribution across racial groups. Unfortunately, the results are exactly what you might expect: white people are generally doing far better than blacks or latinos (although there is a case to be made that this relative situation is generally improving). 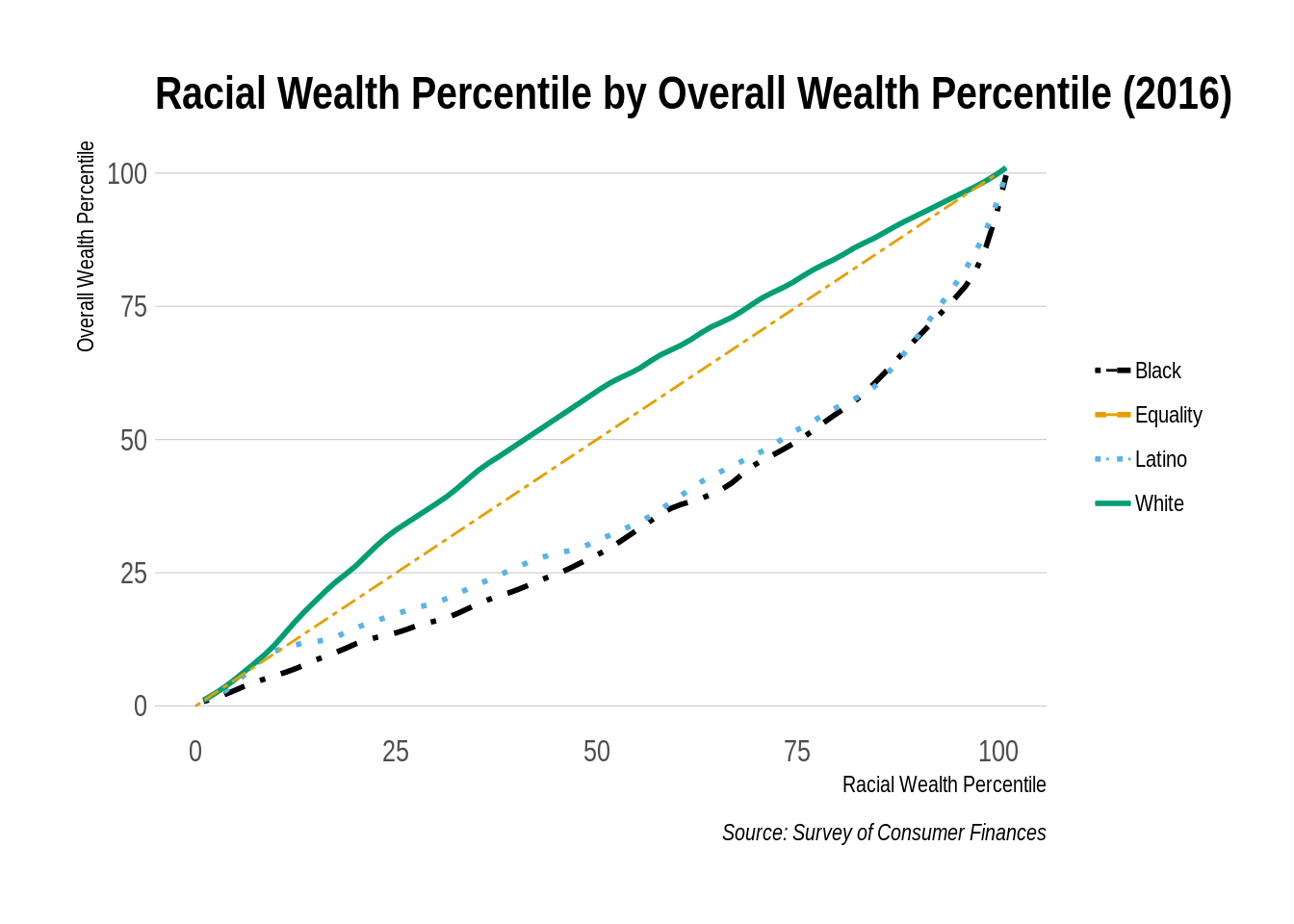 The line \(y=x\) corresponds to equality – if there were no difference in the wealth distribution amongst black families and families in general, then the median black income ought to be roughly the same as the overall median income. This is decidedly not the case.

When dealing with extremely skewed distributions, viewing things on a different scale often helps. A logarithmic transformation, for example, lets us look at orders of magnitude instead of actual values, which has the effect of flattening out the huge, exponentially larger tails of the wealth distribution.

Given that there are negative values of wealth, a logrithm doesn’t quite work (it is undefined for negative values), but something like the inverse hyperbolic sine does the job: 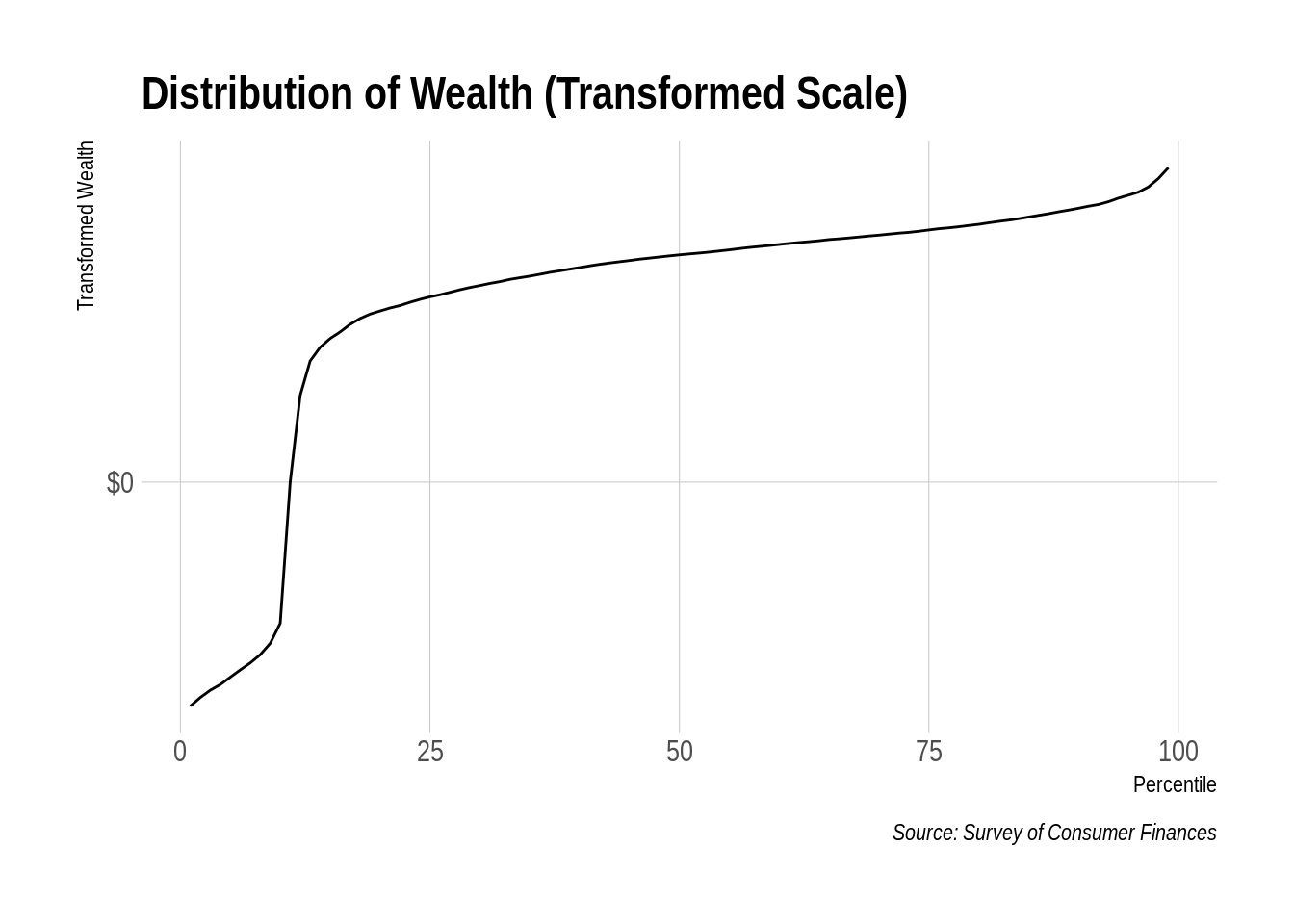 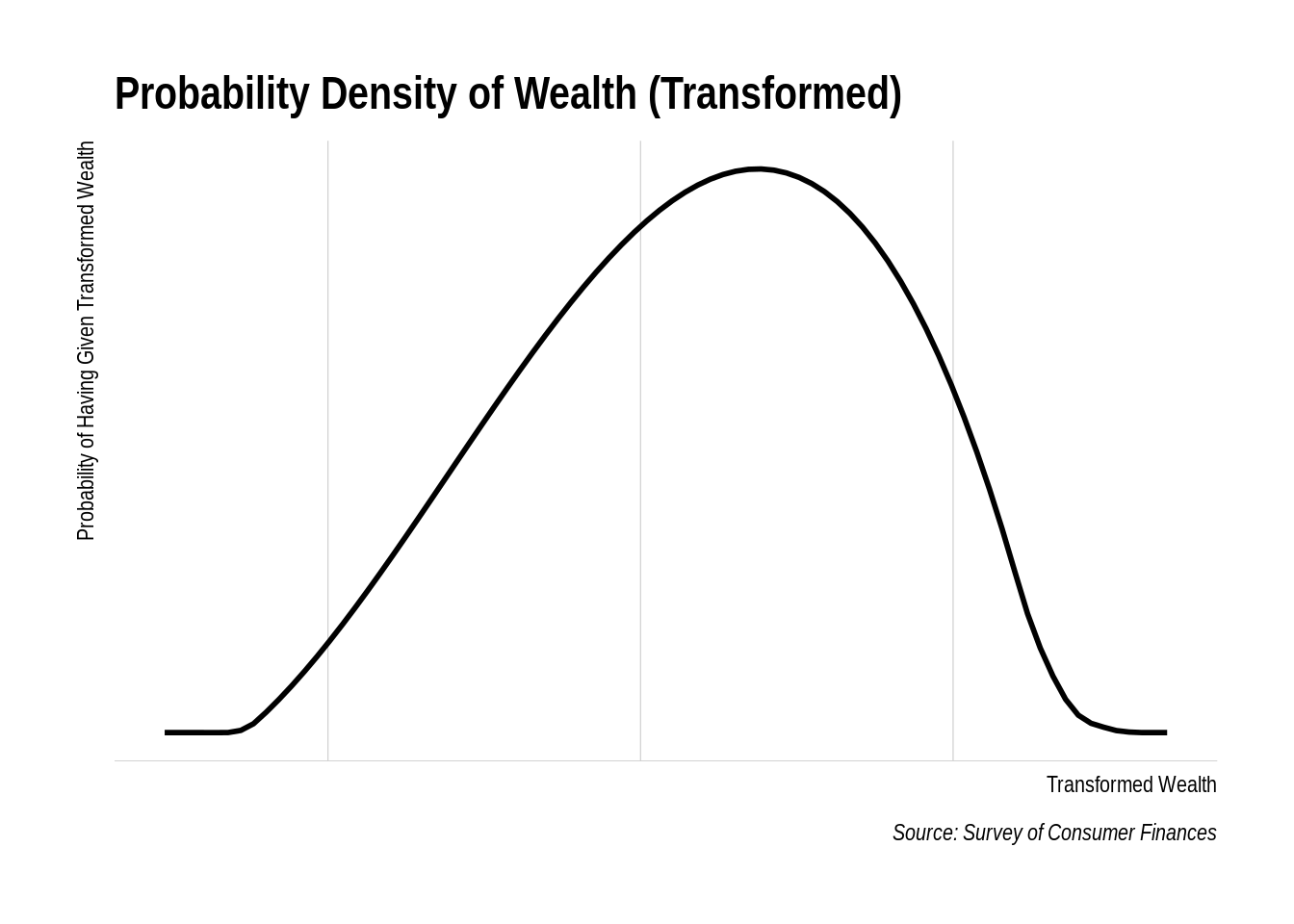 This looks closer to something that is approximately like a normal distribution, which (trust me) is much better. After applying this transformation, the problems around relative comparisons in absolute wealth look much better: 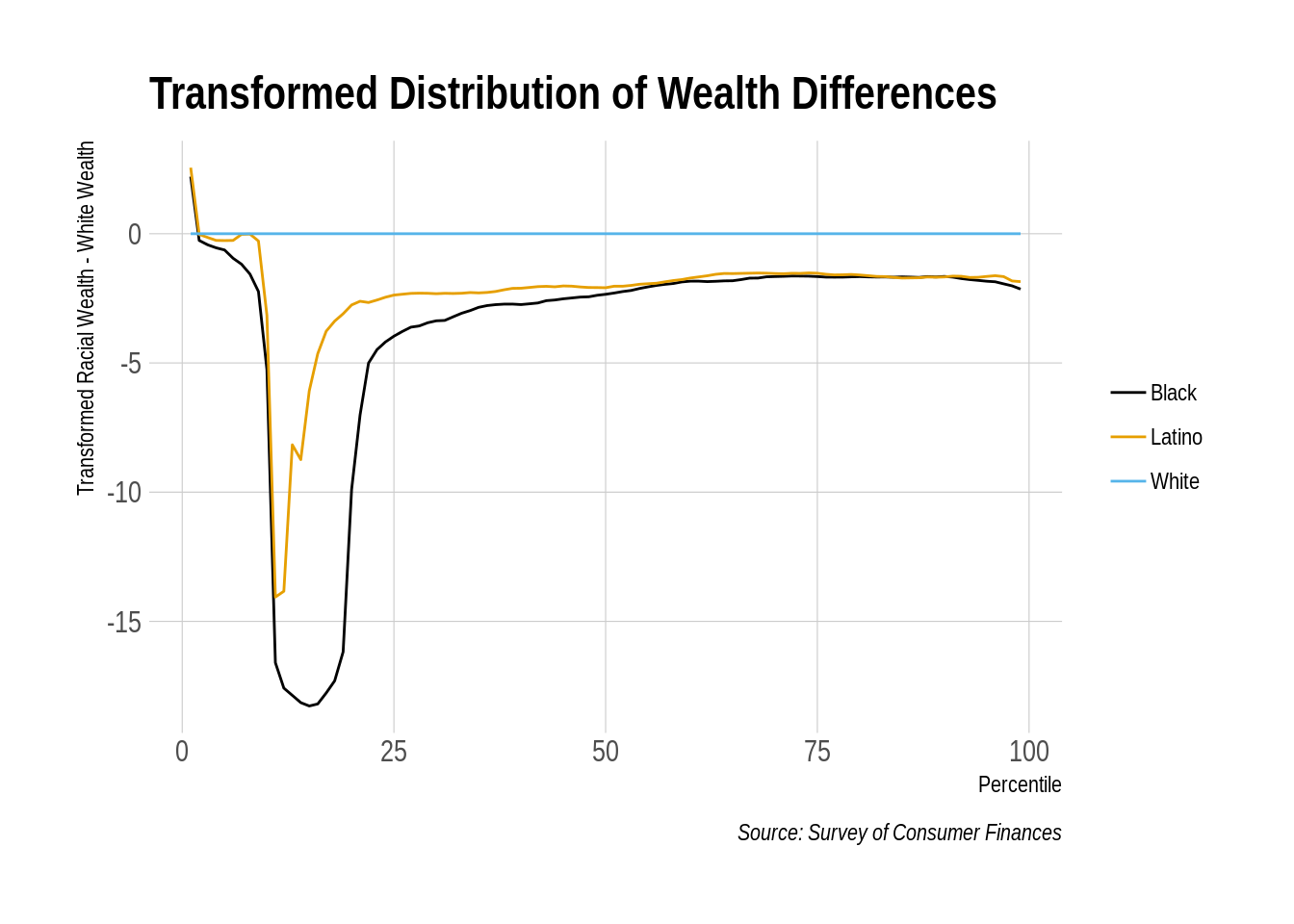 Now here’s a plot that tells us several things! 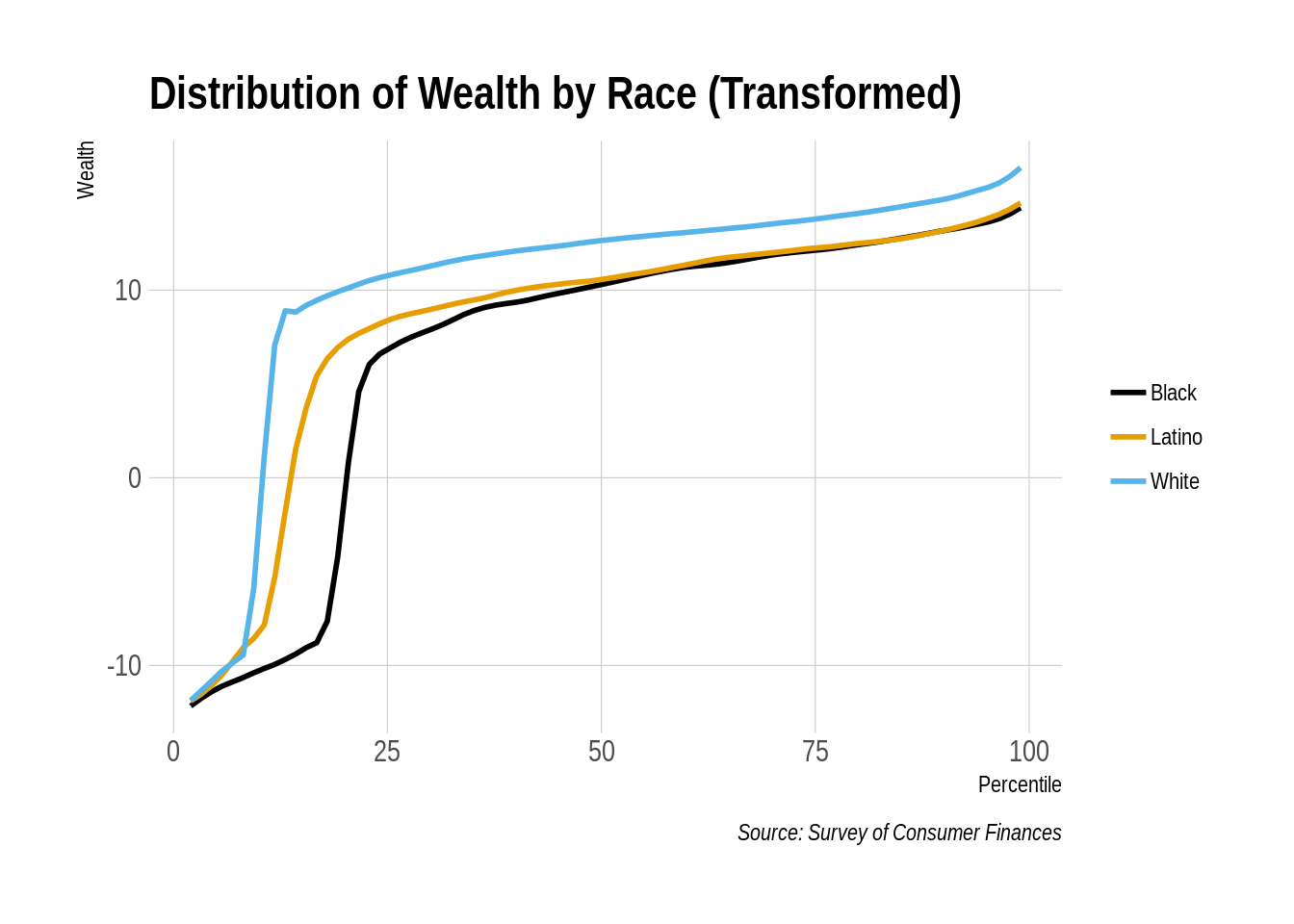 This one is a bit strange, but I think it’s worth throwing out there as an option.

The x-axis of this plot is the percentile, and the y-axis is scaled separately so that the positive (negative) values for each percentile sum to 1 (resp. -1) over the different races at each percentile. The positive and negative values are then separately stacked on top of one another, giving you the chart below (I have applied the asinh transformation as well): 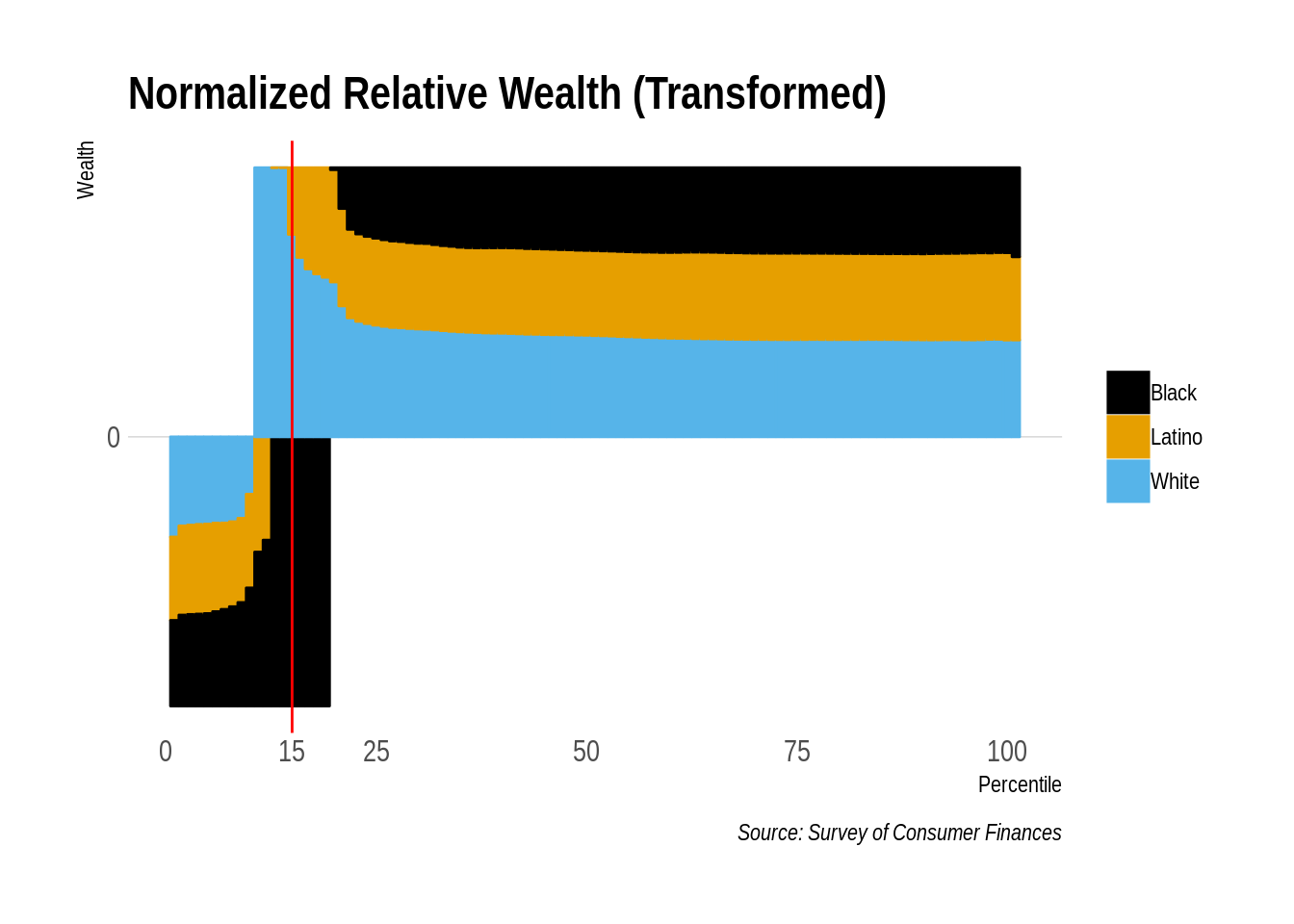 This takes a minute to understand, but I think it provides some decent information. Let’s take a look at an example value, which I’ve marked off with a red line: At the 15th percentile, all of the color below the axis is black. This means that at the 15th percentile, only black families have a negative net worth, while both latino and white families have a positive net worth.

This lets us eyeball:

There is, finally, the boxplot. Here’s my take on a Tufte-style minimal boxplot: 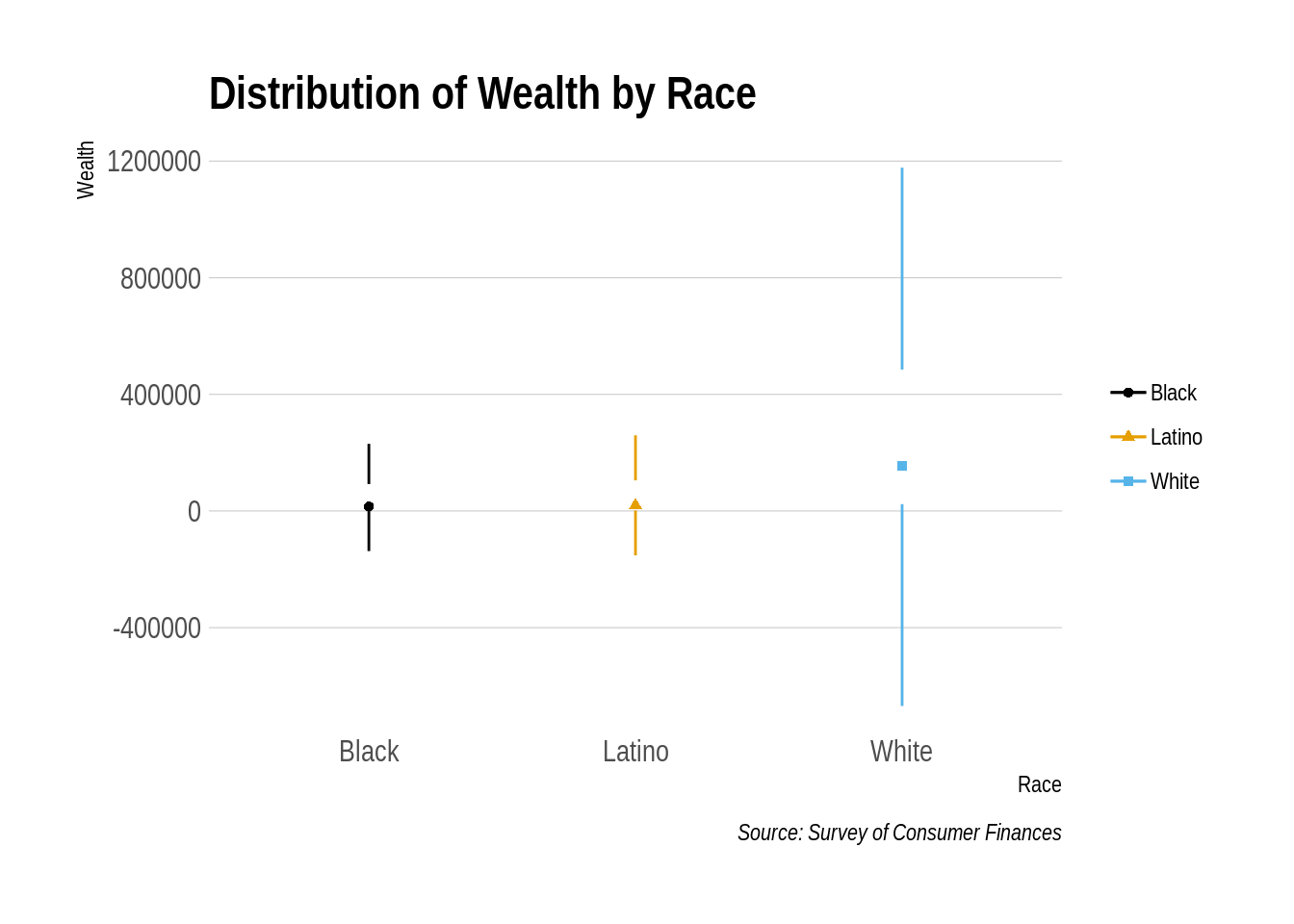 A transformed version of this makes things a bit clearer, as before: 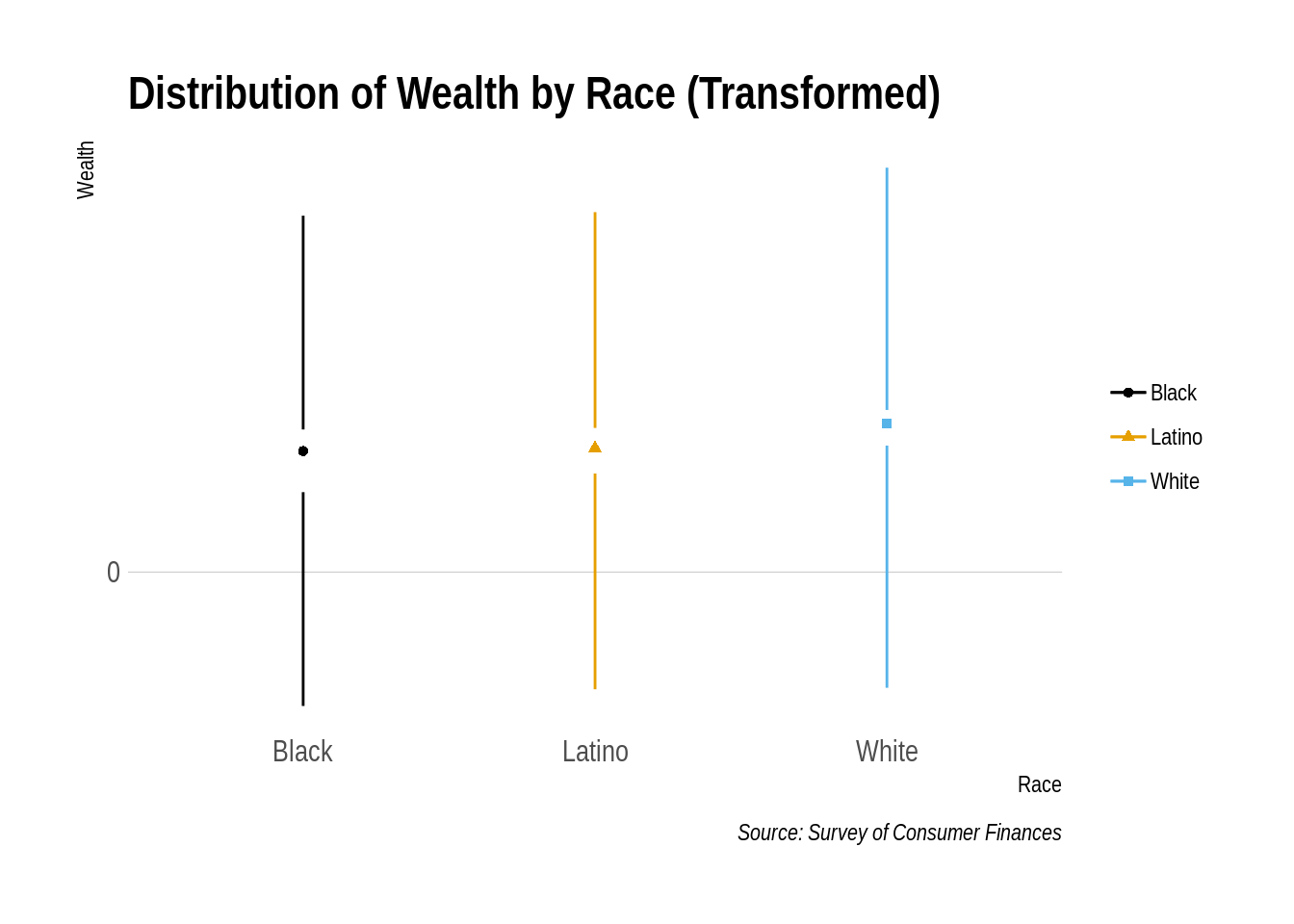 There are also fancier alternatives to this that have their own tradeoffs, like violin plots or pirate plots.

So, what’s the right thing to do? Well, it depends on the audience and personal preference, and every approach has its pros and cons. Here’s my Hot Take:

I think people will generally be willing to accept the hand-waving around the scaling transformation, especially if getting across the qualitative picture is the overall goal.